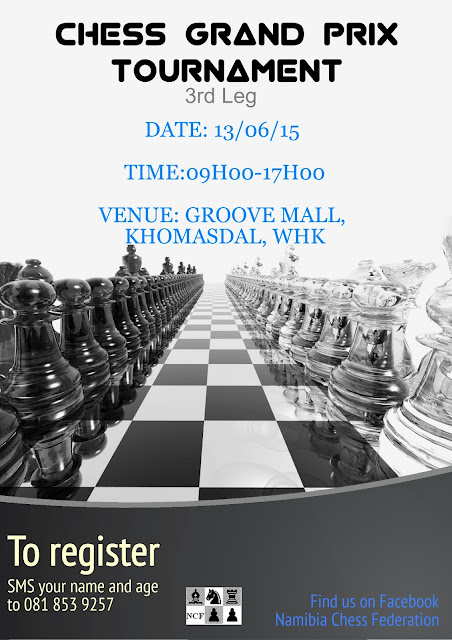 6. GRAND PRI POINT SYSTEM:
The Grand Prix Series consists of 5 (FIVE) legs. The overal winner of the Grand Prix shall be the player who amasses the most points in 4 (FOUR) of the 5 legs. For each Grand Pri leg, points will be allocated as follows to the top 8 (EIGHT) players;

6. PAIRING AND TIE BREAK SYSTEM:
Swiss Manager will be used for the pairings. Please note that the breaks between rounds will be used to do the pairings according to the SWISS SYSTEM.
TIE-BREAK: Direct encounter, Progressive Score and Most Wins.
If players are still tied, then 1 game of Armageddon will be played.
7. PRIZES:
Open Category

GRAND TOTAL 2,000 sponsored for this leg


General Rules:
1. Silence at all times.
2. Cellular phones should be switched off or put on “silent” mode if switched on. No talking while playing allowed.
3. No assistance to chess players will be allowed during their games. A player who offers assistance will be expelled from the tournament.
4. If a player touches a piece, (s)he should move that piece, provided a legal move can be made with that piece. (Touch is a move.)
5. A player may claim a win if his/her opponent makes an illegal move. This claim should be made immediately and not a move later.
6. Each player must press the clock with the same hand that moves the pieces. However, when castling, capturing or completing a promotion, a player may use both hands.
7. Any player who makes themselves guilty of rude behaviour will be disqualified with immediate effect.