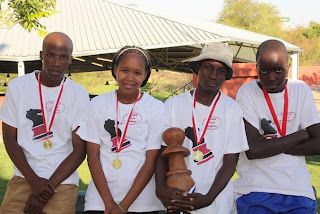 The past weekend 27 high school teams and 14 primary school teams battled it out for the champions in their respective sections. A total number of 100 high school learners and 48 primary school learners played 522 chess matches in 8 hours.
A lot of nerve wrecking moments were experienced when the winning scale played see-saw with the teams. In the high school section the defending champions Zandell Chess Academy (ZCA) wore their club shirts with the words “Perennial Champions” on the back. Many called it a bluff, but they underlined their reason for competing in the third round winning that match 4-0 against Paresis Secondary School to take the lead. ZCA further made it look very easy as they remained in pole position to the end. Whilst other teams like Wennie Du Plessis, TWCA High and Kollin Foundation swapped places every other round in 2nd and 3rd position. In the end ZCA closed the curtains on the other teams with 23.5 out of 28 games in 1st place and received N$2000, gold medals and the floating trophy remained in their possession. And with no surprise the highly competitive Kollin Foundation A and B teams took 2nd and 3rd respectively and received N$1500 with silver medals and N$1000 and bronze medals. Both teams scored 20.5/28. ZCA is the second team to win the title back to back.

The Weekend Chess Academy’s (TWCA) Primary A team took the lead in round 2 with one point after which it became a one horse race. TWCA primary A team already had the Gold medal in the bag after the 6th round and yet won their last round against the TWCA primary B team 4-0 taking their tally to an impressive 25 out of 28 games. The fight was more about who would take silver and bronze because the TWCA team bulldozed three teams with 3-1 and four teams 4-0 on the four boards.

In second place was the Van Rhyn Chess Club with 19.5 out of 28 games. Worth mentioning is that they played only 6 rounds due to late registration when they missed the first round. Van Rhyn who was in 3rd place after 6 rounds facing the then 2nd place holders Orban Primary made quick work of them with a demolishing 4-0 to take silver ware. This left Orban Primary with 16.5 out of 28 and the Bronze medals after 7 rounds. Both TWCA and Orban learners are trained by the coaches of TWCA whilst Van Rhyn is trained by ZCA and school teachers. TWCA primary A was 1st and received N$1000, Van Rhyn Primary A in 2nd and received N$700 and Orban Primary was 3rd and received N$400.

The Namibian Chess Federation strongly encourages schools and academies to get their learners ready for next year. The main junior events normally takes place in March, June, July and September of every year.
Posted by Namchess at 22:21 No comments: 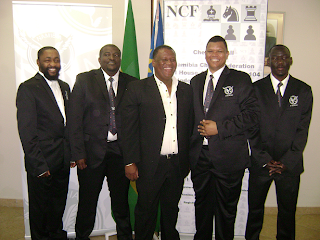 16 September 2010, was yet another historic event, when the Namibian National Chess Olympiad Team received National Colours.

We registered chess as a sport in 2005 and after 5 years received national colours for the first time for international participation. According to the World Chess Federation's rating list Namibia ranks 102 out of 160 countries registered with FIDE. Namibia also ranks 9th out of 22 African Countries affiliated to the World Chess Federation, FIDE.
Our previous participation was:
Russia, Moscow, 1994
Russia, Elista, 1998
Turkey, Istanbul, 2000
Slovenia, Bled, 2002
Spain, Calvia, 2004
Italy, Turin, 2006
Germany, Dresden, 2008
We have participated in 7 Chess Olympiads to date and this will be our 8th attempt in Russia, Khanty- Mansiysk. Fide Master, Leonhard Mueller got two silver medals at the previous chess Olympiads, 1994 and 1998 and that is a sign of opportunity and progress.
Our team is as follows: Candidate Master, Charles Eichab, 3 times Namibian Champion; Fide Master Leonhard Mueller, 2010 Namibian Champion; Candidate Master, Otto Nakapunda, ranked 5th in Namibia 2010; Max Nitzborn, ranked 2nd in Namibia 2010 and Simon Shidolo, ranked 4th in Namibia 2010.
We would like to thank, the Namibia Sports Commission for their assistance as well as the Media for covering this historic event.
The Brave Knights hope to bring back medals for Namibia.
In the picture from left to right: We have, Otto Nakapunda, Charles Eichab, Rusten Mogane, Max Nitzborn and Simon Shidolo. Leonhard Mueller could not attend the ceremony.
Posted by Namchess at 22:53 No comments:

The Namibia Chess Federation (NCF) has the School Team Championships list as the last junior tournament on its schedule. We have grown from strength to strength since 2005 when we hosted our first event.

This event is important for the junior chess players to prepare them for what they can expect should they compete one day in the Chess Olympiads. The Team event is a 4 (four) player per team event and the different teams will compete against each other. This year the NCF also decided to split the high schools from the primary schools. However should any primary school team feel determined enough to compete for the ultimate crown they will have to play in the high school section.
2009 Top 3 places:
1st – Zandell Chess Academy A; 2nd – The Weekend Chess Academy A and 3rd – Kollin Foundation Secondary School A

The NCF invites every school and chess academy across Namibia to send teams to take part in the 6th Namibia National School Team Championships 2010. Every school is entitled to send 3 teams.

NCF Membership: - Every team will have 4 players. The School or Academy has to pay their annual membership fee of N$200-00 with the NCF to enable participation of their teams. Participants have to be u/20.

Prizes: – N$6600 will be split between the two sections and in both sections teams will be awarded with gold, silver and bronze medals but only the high schools section winner will be crowned as the champions.

Participants will be responsible for their own refreshments and transport to and from the venue. Schools are requested to contact Josef Nitzborn – 081 469 1522 for registration forms and more information. Registration forms should be completed and fax to the NCF at 061- 236 181 on or before 15 September 2010.

The NCF would also like to welcome and thank the early birds in Rundu Secondary School, Orban Primary School and Luderitz Secondary School for their registrations and enquiries. Will your schools’ name be in the winners for 2010? It’s your move!
Schools may download all the necessary information below:
Invitation.
Registration Form.
Tournament Regulations.
Posted by Namchess at 23:52 No comments: