Twenty-three-year-old Unam student James Dimba successfully defended his title as the King of Blitz when he won the 6th NAMSPORTS Independence Blitz Chess Tournament this past weekend. Dimba scored 10 out of 11 to edge out tournament host Otto Nakapunda who scored 9.5 and Charles Eichab who managed 8.5 points. Lishen Mentile also defended her crown as the best female player with a points tally of 7.

Half-way through the tournament, Dimba led comfortably with a perfect score of 6 out 6, followed by Olympian Max Nitzborn and former Junior Champion Toivo Nangula 5. Hot on their heels were the usual suspects Nakapunda, Eichab, Simon Shidolo and a rejuvenated Glenville Kapuire, also a former Junior Champion, all on 4.5.

Things got interesting in round 9 when Goodwill Khoa, the 2010 silver medallist, handed Dimba his solitary loss, blowing the title race wide open. Khoa would eventually finish 4th but there was nothing to stop Dimba, who hails from Lusaka in Zambia, from walking away with the Job “Zarp” Ndimwedi trophy.

Brave Warriors goal-tender Attiel Mbaha showed his chess prowess by scoring a respectable 7 out of 11, but he jokingly said he wasn’t happy not being on top.

Interesting battles were also fought on the lower boards with 7-year-old Kevin Gurirab arguably walking away with the performance of the day. Gurirab’s score of 5 wins netted him the Under 8 honours and it was in fact good enough to win the Under 10 section. In the final round, he beat 20-year-old Raurovandu Kandikirira, almost 3 times his age. He was followed by Kasparov Nangula. The Under 10 section was won by O’Brien Simasiku, followed by Jamal Simataa (both 4 points) and Tuli Petrus (3). Mubasen /Hochobeb edged his elder brother Mutago /Hochobeb into third place to win the Under 12 age-group.

Ileni Kandume took second place. In the closest of finishes, the U14 trio of Abhinav Lahiri, Nicola Tjaronda and Chauncey Nakapunda all scored 6 points and had to be separated by tie-breaks to finish in that order.

Despite scoring only 1 win in his last four games, Matjua Kajovi won the U16 section thanks to his strong start of 5/7. He was followed by Immanuel Gariseb and Lishen Mentile. As in the U14 section, all three scored 6 points and the tie-breaks had to set them apart. National Junior Champion Julian Isaaks took top honours in the U18 section thanks to his superior progressive score over Mitch Nitzborn. Both scored 6.5 with Hange Tjingaete half a point behind in third.

Calvin Eixab, Namibian Junior Open winner, scooped the U20 top prize with a round to spare. He scored 7 points ahead of Richman Tjiriange (5 points) who got expelled after round 10 for interfering in a crucial match between Julian Isaak and Greg Tjamburo. Raurovandu Kandirikirira came in third place with 4 points. The tournament, which attracted 52 chess enthusiasts, took place in the UN Plaza hall and not the traditional open-air amphi-theatre for fear of rain.

The various winners shared N$ 3,000 and all top three finishers received certificates. Meanwhile, the Namibia Chess Federation (NCF) has announced that the long-awaited Annual General Meeting (AGM) will take place on the 16th April 2011 at the Village Courtyard Suits, 18 Liliencron Street . Motions and nominations for executive members should be forwarded to the NCF no later than Friday, 8th April 2011.

Dear Chess Friends, Everybody are invited to the 2011 Namsports Independence Blitz Chess Tournament, this weekend, 19 March 2011 at the UN Plaza Hall at the Corner of Independence Avenue and Penning Street, Katutura.

The Blitz Champion James Dimba will defend his title this year against Candidate Masters, Otto Nakapunda, Charles Eichab and runner up of last year Goodwill Khoa who almost won the event. The organizer of the event has promised that this year we will witness a chess event unlike any seen before in Katutura.

Posted by Namchess at 00:40 No comments: 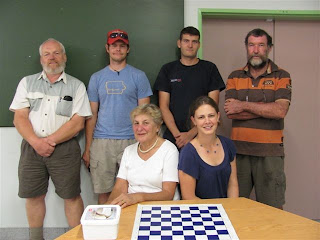 The small town of Katima Mulilo has much to offer both residents and visitors…boating, fishing, game drives, and much more. One activity not available was the game of chess. Malcolm Williamson, recently from Windhoek, started a very small weekly chess meeting and game with just one other interested party – Helen.

Christoph, who previously taught chess at a local school, joined and since our inauspicious beginning, we have grown enormously. Katima Mulilo Chess Club now boasts ten members and numbers are increasing.

Wednesday evening in Katima has become a date to look forward to as chess enthusiasts meet and enjoy two hours of a most enjoyable and interesting sport.

The Katima Mulilo Chess Club members thank the Namibian Chess Federation for their tremendous support and sponsorship. Although distance is a problem, hopefully one day we will meet and play against other clubs.

As the saying goes “from small acorns…” and this small chess club will soon hold their first AGM and apply to become an official member of the Namibian Chess Federation. And from there, who knows?
In the picture above we have: Front Row L to R Helen and Erica
Back Row L to R Malcolm, Doug, Christoph and Dick.
Story and picture contributed by Malcolm.
Posted by Namchess at 03:36 2 comments: