2. THE PURPOSE OF THIS CHESS TOURNAMENT:
2.1 To determine the 2015 Namibian National Junior Champion as well as age-group Champions.
2.2 To promote chess as a sport, intellectual, educational and recreational outlet among the
youth and the broader Namibian population.
2.3. To improve the standard of Junior Chess in Namibia.
2.4. To select the Junior National Team that will be allegeable to represent the country at regional and international chess events.

5. PARTICIPANTS:
The top 8 (Namibians citizens) of every age-group  and  two selected female players regardless of their final standing following the 2015 Namibian National Junior Chess Championships Open are hereby invited to play.

6. REGISTRATION & REGISTRATION FEES:
6.1 Invited players should confirm their participation by (10th July Friday—14h00).
6.2 There will be no registration fees for this tournament. All invited players will part-take once they confirm their participation.
7. PAIRING SYSTEM, TIE-BREAKS AND RATE OF PLAY:
7.1 The Championship format will be a SWISS System tournament played over 7 (Seven)
Rounds.
In the event of 8 players or fewer partaking in any age-group, a round-robin system will be applied.
7.2 Swiss Perfect will be used to do the pairings.
7.3 The tie-breaks will be applied in the following order:
7.3.1 For the Swiss System
a) Direct encounter
b) Progressive Score
c) Median Bucholz
d) Bucholz
7.3.2 For the Round-robin System
a) Direct encounter
b) Sonneborn-Berger
c) Most wins with Black
If players are still tied, then 1 game of Armageddon (5 minutes for Black and 6 minutes for
White.) will be played. A win for Whites wins the encounter for him/her; and a draw or win for Black wins the encounter for him/her.
7.4 The rate of play will be 60 minutes per player.

*Cash prizes (and possibly trophies) will be announced at the start of Round 2.

11. NATIONAL TEAMS
The 7 (seven) winners of every age-group will automatically form part of the National Junior
Teams. In addition, 7 (seven) more will be chosen by the National Team Selectors as stipulated in the NCF Document “National Chess Teams” which will be available at playing hall.

12.1. 2015 World Youth and Cadets Championships—Greece
First place winners, male and female in each age group at the National Junior Championship (closed) will automatically qualify to represent Namibia in Halkidiki, Greece at the World Youth and Cadets Championships between the 24th October (arrival) and 6th (departure) November 2015. The will endeavor  to solicit funding for the for this tournament however parents may need to provide financial assistance for flight tickets should the NCF fall short in its endeavors.

Second and third place winners of each age group may also represent Namibia in Greece but at their own expense.
Any junior player that does not make the top 3 may also approach the federation to part-take in the tournament for as long as they covered their own costs including transportation and provided there is still space available.

This year’s World Junior Chess Championship (for boys & girls under 20) will be held in Khanty-Mansiysk , Russia, from 1st September (arrival) to 16th September (departure) 2015.

The NCF will endeavor to send the overall winner from the under 20 section to represent Namibia at this event with all expenses paid.

Top male and female players from each age group will represent Namibia at the 2015 Schools Individual Championships to be held in Botswana from the 14th to the 23rd August  2015.

13. ACCOMMODATION AND TRANSPORT:
The participants and/or their schools, organizations that they represent will be responsible for
their own accommodation, transport and meals for the duration of the event.

14. DRESS CODE FOR PARTICIPANTS:
The dress code is smart casual or school uniform.

Disclaimer: The Namibia Chess Federation does not accept any responsibility for injuries to any party, participant or spectator during the above mentioned chess event. We, however, will endeavor to have a conducive and competitive environment for all stakeholders as we strive to promote sports of the mind in Namibia under the best possible conditions which our finances and resources may allow. 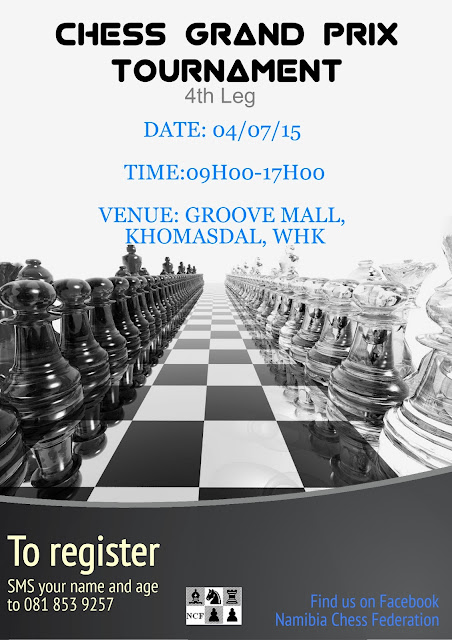 6. GRAND PRI POINT SYSTEM:
The Grand Prix Series consists of 5 (FIVE) legs. The overal winner of the Grand Prix shall be the player who amasses the most points in 4 (FOUR) of the 5 legs. For each Grand Pri leg, points will be allocated as follows to the top 8 (EIGHT) players;

6. PAIRING AND TIE BREAK SYSTEM:
Swiss Manager will be used for the pairings. Please note that the breaks between rounds will be used to do the pairings according to the SWISS SYSTEM.
TIE-BREAK: Direct encounter, Progressive Score and Most Wins.
If players are still tied, then 1 game of Armageddon will be played.

General Rules:
1. Silence at all times.
2. Cellular phones should be switched off or put on “silent” mode if switched on. No talking while playing allowed.
3. No assistance to chess players will be allowed during their games. A player who offers assistance will be expelled from the tournament.
4. If a player touches a piece, (s)he should move that piece, provided a legal move can be made with that piece. (Touch is a move.)
5. A player may claim a win if his/her opponent makes an illegal move. This claim should be made immediately and not a move later.
6. Each player must press the clock with the same hand that moves the pieces. However, when castling, capturing or completing a promotion, a player may use both hands.
7. Any player who makes themselves guilty of rude behaviour will be disqualified with immediate effect.


Web: http://namchess.blogspot.com
Posted by Unknown at 12:02 No comments: