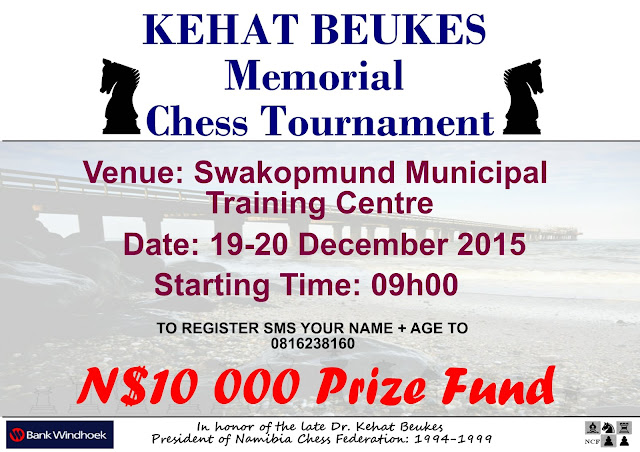 Who may participate: Tournament is open to everyone.

Prizes: (*will be announced at the start of round 2 on 19th December)

* Note that all prizes are subject to change and can go up but not less than the stipulated allocations above. Final announcements would be made before round 1.
* Being 20 years of age by 01 January 2015 makes you ineligible for any junior prizes.
System and rate of play: The chess tournament will be a 9 round Swiss system and the rate of play will be 30 minutes per player.

Pairing and Tiebreak System: Swiss Perfect / Swiss Manager will be used for the pairings. Tie-Breaks will be Direct Encounter, Progressive Score, Median Buchholz and Buchholz.

General Rules:
- Silence at all time.
- Cell phones should be switched off at all times in the playing hall. If a players’ cell phone rings during a game he or she will forfeit their game.
- No sharing of prizes. No player can win more than 1 prize
- Touch is a move unless the piece that was touch has no legal move.
- Any player who makes themselves guilty of rude behaviour will be disqualified with immediate effect.
-A player who is it not seated after 15 minutes of the commencement of play will forfeit the game.
- Any one that registers after 21h00 on 06 December 2015 will be paired only in the second round and will pay N$ 50 for registration as penalty.
-FIDE rules for rapid chess will be put up at the tournament side and players are advised to familiarize themselves with the rules.
- The Local organizing committee will be CM Charles Eichab and Ms. Larissa Beukes
- Members of the appeals committee will be selected at the tournament.
- All complaints should be directed to the Appeals Committee.

Brought to you by:

“In loving memory of the late Dr. Kehat Beukes – a dedicated and loving family man,


and an unmatched pioneer of chess in Namibia.”
Posted by Unknown at 13:15 No comments: