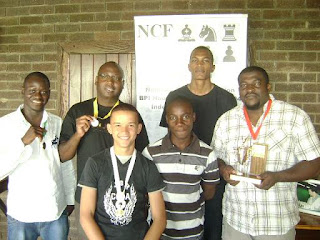 On the scholar side it was a horse race between Xenophone Julius and Calvin Eixab. However, Julius proofed that he
is the better player after he defeated Eixab in their final round encounter. For his effort Julius walked away with N$500.00 and Eixab got N$ 300.00 for second place. Abigail Julius the only girl was the third best scholar. She is defintely a candidate for the chess olympics in the near future.

In the group picture at the back is Ingwe Chipande, Toivo Nangula, Goodwill Khoa and Charles Eichab (Champion). In front is Xenophone Julius and Calvin Eixab.
Posted by Namchess at 12:52 No comments: 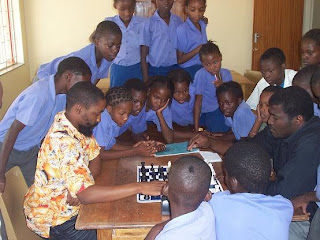 The Kehat Beukes Memorial which is held in earnest since 2006 but stretches back to 1994 will be held at the Klein Windhoek Guest House in Windhoek. The tournament has over the years attracted many foreigners from all the nooks and corners of the world thus maintaining each International status. Being essentially an open tournament the Kehat Beukes Memorial has also attracted an array of Namibia’s foremost chess players as well.
This year’s tournament will be graced by Namibia’s only residing titled chess players Candidate Masters (CM) Otto Nakapunda and multiple winner, defending champion and Namibian Champion Candidate Master (CM) Charles Eichab. The organizer CM Eichab said:”Chess is perhaps the only sports were a 7 year old kid can play a 37 year old adult in a serious rated match. After 2000 years it still remains men’s principle form of mental recreation and therefore all is welcome to this event”.
Registration starts at 09h00 on 26 December 2009 followed by 4 rounds of play. Play will continue the following day were the concluding 3 rounds will be played thus bringing the total number of rounds played to seven. Klein Windhoek Guesthouse is the main sponsor with prizes totalling N$ 5000.00 plus an additional weekend for 2 for the winner.

There are many prizes in the Open section as well as Special Prizes in the best scholar and women categories.
Registration will be N$30.00 for Adults and N$20.00 for Juniors.
Please call 081 292 3461 for further information and registration.
In the picture is CM Otto Nakapunda left and CM Charles Eichab on the right with a bunch of young and enthusiastic kibitzers following keenly.
Posted by Namchess at 02:12 No comments:

CANDIDATE MASTER, CHARLES EICHAB IS THE CHESS CHAMPION OF NAMIBIA 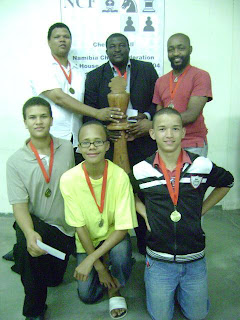 On Monday, 14 December 2009, Charles Sidney Eichab became the Namibian Chess Champion for 2009 for a third time.
The Namibia National Chess Championship was held at the Centaurus Secondary School from 9 December to 14 December 2009. Eichab scored 6/7 points after 4 wins and 2 draws.
In Second place was Candidate Master, Otto Zandell Nakapunda who also scored 6/7 but lost against Eichab in their individual encounter and was place in second position due to his lesser progressive score.
In third place was Max B. Nitzborn with 5/7. Nitzborn lost both his encounters against the Candidate Masters and had to fight tooth and nail against former Namibian Junior Chess Champion Willem August Silver to secure third place.
The best Juniors were TWCA students Xenophone Julius, with 4/7 in first place followed by Julian Isaak with 3.5/7 in second place and Ethan Pretorius with 3.0/7 in third place.
The Namibian Chess Federation would like to wish the entire Namibian Nation a Merry Christmas and a Prosperous 2010.
Posted by Namchess at 07:01 No comments: 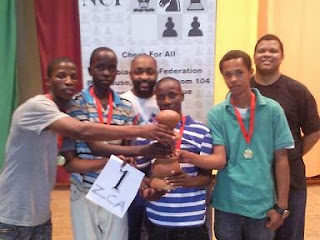 The Zandell Chess Academy took gold this weekend when they scores 24.5 /28 to wrestle the crown from Kolin Foundation Secondary School. The coaches Candidate Masters Charles and Otto from ZCA fielded their best team, Dantago Boois, Hange Tjingaete, Calvin Eichab and Jeremy-Dean van Rooyen. The best performers of the team were 3rd board Calvin and 4th board Jeremy-Dean who both scored 7/7. They won all 7 matches against their opponents. Congratulations to the champions! It’s well deserved.

Worth mentioning is Amoes Demostenes from St. Georges Diocesan School the third player who scored 7/7 in this event.
The Namibia Chess Federation would like to thank all the schools that took the time to participate. All Schools in Namibia are encouraged to join the NCF and register their teams for next year starting as early as 25 January 2010.

We wish all learners a Merry Christmas and a Prosperous 2010.
Posted by Max at 02:50