Following a splendid hosting of the National Junior Championship in Swakopmund for the second year running, junior chess players aged 5 to 20 once again made it to the capital for the final segment of the junior tournament where they showcased an array of classical chess skills at the Windhoek Show Grounds.

Only the top 10 from different age groups made it through to the closed tourney in which only Namibian players could part-take, unlike the open tournament which allowed all juniors including foreign nationals to partake.

In a quest to crown a new national junior champion for each age group, the Namibia Chess Federation made camp at the Windhoek Show Grounds for a three day mind bobbling chess championship witnessed by parents, coaches and spectators from around the country.

Children as young as 5 showed up to play 7 rounds, in a tournament that saw the tournament favorites showcasing just why they continue to be crème de la crème of their age groups.

Grade 12 learner, Immanuel Gariseb, who is nothing short of a familiar face at Namibian chess tournaments walked away as overall winner of the tournament. This triumph marks Gariseb’s third gold medal this year after scooping first place at the 2nd Leg of the Chess Grand Prix in April in Windhoek and the Open-National Junior Championship in Swakopmund earlier this month.

William Kamberipa came in 2nd with a score of 5.5/7, grapping his second silver medal in a raw after finishing 2nd in Swakopmund. Also repeating his Swakopmund performance was third place runner up and UNAM Chess Club player Jossy Uapingene.

Isaskar Hamaseb from Okahandja tantalized his opponents as he scooped gold with a perfect score of 7/7 leaving 2nd place for Hochland High School matric student, Montgomery Gurirab, a who finished with 5.5/7 followed by Leonhard Tjirare from Paresis Secondary School with a 5/7.

The under 16 received more excitement as Sixteen year old Nicola Tjaronda, who is Namibia's current Women's champion defeated her male counterparts with no sweat as usual as she matched on to claim her gold trophy. She was followed by Tibor Trepper in 2nd and Windhoek Afrikaanse Privaatskool (WAP) learner Lida-Marie Calitz in 3rd.

Anthony van der Meer proved to be the most improved player as he charged on from round one sacrificing his strong pieces for his opponents’ minor pieces which either resulted in quick checkmates or long tactical endgame defeats for his nemesis. After coming in first place, Anthony proclaimed that he allowed his opponents to think he was weak during his below average performance in Swakopmund, which he says helped him surprise his opponents in Windhoek. In 2nd place was Mubasen /Hochobeb followed by Hiren Naidoo in 3rd.

The U12 section saw the making of a young chess protégé, Dante Beukes who threshed his entire opponent and finished off in a “Harry the Terminator” style with an undefeated and undisputed score of 7/7. Kevin Gurirab claimed 2nd price and Aldo Horn taking 3rd spot.

In the under 10 section, Joshua Oberholzer also repeated his Swakopmund fit as he came in 1st place. Behind him in 2nd and 3rd were Keisha-Catriona van Wyk and Jane Ditshaba respectively.
The youngest champion of the tournament was 8 years old Galeshewe Jane, who was followed his playground rivals Mika Oberholzer in 2nd and Lure Horn in 3rd.

The first place winners, male and female in each age group at this tournament will be representing Namibia in Durban, South Africa at the World Youth Chess Championship (WYCC) between the 19th and 30th September 2014 with all expenses covered. Whilst second and third place runner-ups of each age group also represent Namibia in Durban but at their own expense. The NCF will only assist them with free transportation to and from Durban.

The overall winner from the under 20 section Immanuel Gariseb will be representing Namibia at this year’s World Junior Chess Championship in Pune, India, from 5th October to 20th October 2014. 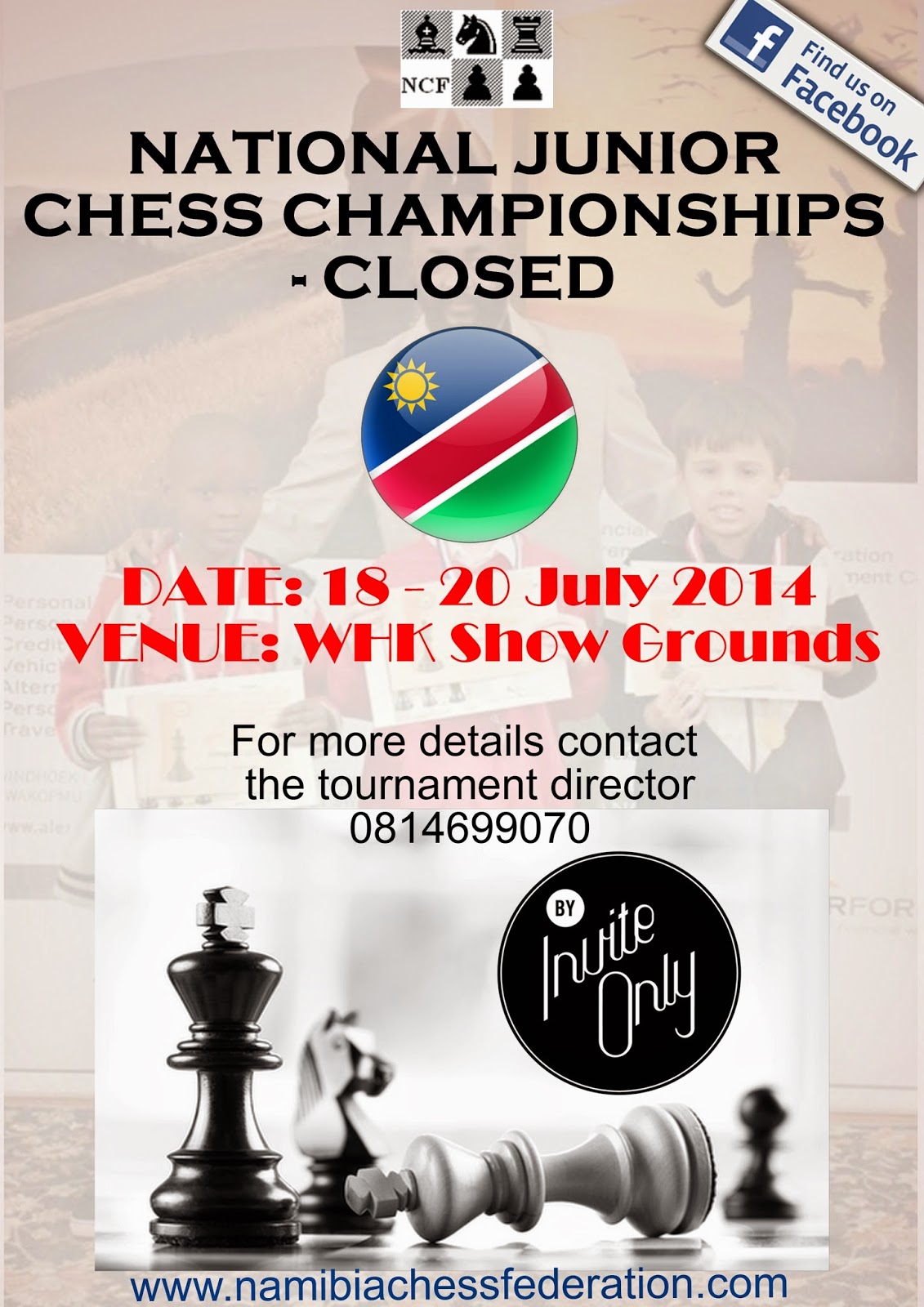 2. THE PURPOSE OF THIS CHESS TOURNAMENT:
2.1 To determine the 2014 Namibian National Junior Champion as well as age-group Champions.
2.2 To promote chess as a sport, intellectual, educational and recreational outlet amongst the
youth and the broader Namibian population.
2.3. To improve the standard of Junior Chess in Namibia.

6. REGISTRATION & REGISTRATION FEES:
6.1 Invited players should confirm their participation by (17th Thurday—20h00).
6.2 There will be no registration fees for this tournament. All invited players will part-take once they confirm their participation.
7. PAIRING SYSTEM, TIE-BREAKS AND RATE OF PLAY:
7.1 The Championship format will be a SWISS System tournament played over 7 (Seven)
Rounds.
In the event of 8 players or fewer partaking in any age-group, a round-robin system will be applied.
7.2 Swiss Perfect will be used to do the pairings.
7.3 The tie-breaks will be applied in the following order:
7.3.1 For the Swiss System
a) Direct encounter
b) Progressive Score
c) Median Bucholz
d) Bucholz
7.3.2 For the Round-robin System
a) Direct encounter
b) Sonneborn-Berger
c) Most wins with Black
If players are still tied, then 1 game of Armageddon (5 minutes for Black and 6 minutes for
White.) will be played. A win for Whites wins the encounter for him/her; and a draw or win for
Black wins the encounter for him/her.
7.4 The rate of play will be 60 minutes per player.

*Cash prizes (and possibly trophies) will be announced at the start of Round 2.

11. NATIONAL TEAMS
The 7 (seven) winners of every age-group will automatically form part of the National Junior
Teams. In addition, 7 (seven) more will be chosen by the National Team Selectors as stipulated
in the NCF Document “National Chess Teams” which will be available at playing hall.

Second and third place winners of each age group may also represent Namibia in Durban but at their own expense. The NCF will only assist them with free transportation to and from Durban.

Any junior player that does not make the top 3 may also approach the federation to part-take in the tournament for as long as they covered their own costs including transportation and provided there is still space available.

The overall winner from the under 20 section will represent Namibia at this event with all expenses paid. If the overall winner cannot take part then the 2nd place or the 3rd place run winner will replace him/her accordingly.

13. ACCOMMODATION AND TRANSPORT:
The participants and/or their schools, organizations that they represent will be responsible for
their own accommodation, transport and meals for the duration of the event.

Since this is a National Championship, the Namibia Schools Sport Union (NSSU) can be
contacted to assist with travel arrangements and/or board and lodging.

15. DRESS CODE FOR PARTICIPANTS:
The dress code is smart casual or school uniform.

Disclaimer: The Namibia Chess Federation does not accept any responsibility for injuries to any party, participant or spectator during the above mentioned chess event. We, however, will endeavour to have a conducive and competitive environment for all stakeholders as we strive to promote sports of the mind in Namibia under the best possible conditions which our finances and resources may allow.