In the Picture we have the late Dr. Kehat Beukes: 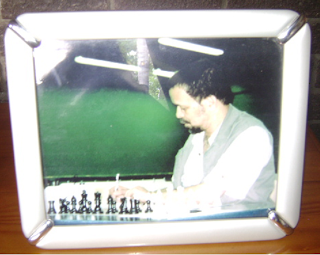 It's that time of the year again as we prepare to battle at the last chess tournament on the calendar of the Namibia Chess Federation. Chess is one of the few sport types which can be played all year round and for the fanatics and professionals anyplace, anytime goes well.

The Kehat Beukes Memorial Chess tournament will be held at the Thuringer Hof Hotel in Windhoek, this Saturday and Sunday 4th &5th December 2010.

The tournament, held in earnest since 1994, is staged to honour the memory of the late Kehat Beukes, who was a well-known medical practitioner as well as the president of the Namibia Chess Federation.

The tournament has over the years attracted many foreigners from all corners of the world, thus maintaining its international status. The tournament is historically well supported by many of Namibia's foremost chess players.

This year's tournament will be graced by Namibia's Candidate Masters Otto Nakapunda and Charles Eichab. Eichab has now won the tournament for two years in a row but will face tough opposition this time around. Max Nitzborn, runner-up at the Sanlam Namibia National Chess Championship 2010 as well as Dimba from Zambia will be the other strong title contenders.

Registration is open untill Friday. Registration forms and the Tournament Regulations can be downloaded below by selecting the links provided.

Players can download, complete and e-mail the registration forms or alternatively sms their details to 0812923461.

All chess players are invited to participate in the 5th Kehat Beukes Memorial Chess Tournament 2010. The event will be an all play all 9 round swiss tournament . Registration fees are N$30.00 for Adults and N$20.00 for Juniors.

The tournament regulations can be viewed here. For more details, please contact Mr. Charles Eichab at 0812923461.