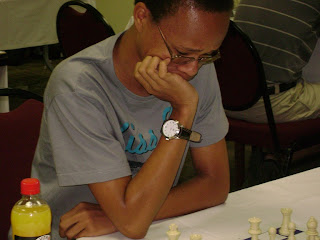 In round 3 Julian Isaak and William Kamberipa was paired agaisnt two senior chess players and Julian remarked to his peer "We will get them today William". Little did we know that his words was no idle comment it was a threat. It was real. The young lad, according to his version blew away Candidate Master Charles Eichab after the latter made an apparent blunder.

On the other side of the hall Max Nitzborn the 2011 National Chess Champion also had to fight for dear life as he chose the dubious Budapest Defence against one of his students. The attack of the young lad was relentless and Nitzborn had to accept defeat at the end. It was shock and awe. Two TWCA (The Weekend Chess Academy) students just annihilated two senior chess players in the same round. This feat placed Julian Isaak in the lead and he remained there until the last round. 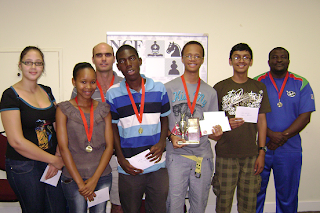 In the picture is all the winners. From left to right Stephne Swartz, Lichen Mentile, Rex Oberholzer, Sylvestor Nanyala, Julian Isaak (The Champion) Abhinav Lahiri and Charles Eichab.
The 6th Kehat Beukes Memorial chess tournament came to an unusual end. It’s the first time in Namibian chess history where 4 players came in tied for first place and had to be separated by tie-breaks. The players were, Julian Isaaks, Sanders Oberholzer who is a former national team player returning to chess after a long break, CM Charles Eichab and Max Nitzborn. They all scored 7/9 points.
Direct-encounter was the first tie-break and could not be applied because the players didn’t play out amongst themselves which meant that the placement had to be done by the Progressive score which was the 2nd tie-breaker. Julian who scored an inspired victory against top-seed and two time winner- CM Eichab- when the latter blundered in a winning position led the tournament on progressive score from that moment onwards.  He lost to Oberholzer and Nitzborn in the later rounds but still enjoyed a superior progressive score.
In 2nd place was CM Eichab and in 3rd Oberholzer. Lishen Mentile won the best Girl Prize followed by Stepne Swartz. Sylvester Nanyala rallied after a poor start to won the best Junior prize followed in second place by Abhinav Lahiri. The organizers would like to thank Anna Bayer, Dr.Ogbonna as well as Thuringer Hof hotel and Windhoek Country Club and Resort for sponsoring the event.

The Namibia Chess Federation would like to thank Charles Eichab and Larissa Beukes for organizing the event. Well done!! Keep it up.


Who may participate: Tournament is open to all players of all ages.


Play: All players will play under 1 section however differentiations for special prizes will be determined through the final standings.


Remarks by Max B. Nitzborn President of the Namibian Chess Federation (NCF)


Announcements by the Arbiter


* Note that all prizes are subject to change and can go up but not less then the stipulated allocations above. Final announcements would be made before round 1.


System and rate of play: The chess tournament will be a 9 round Swiss system and the rate of play will be 30 minutes per player.


Pairing and Tiebreak System: Swiss Perfect will be used for the pairings. Tie-Breaks will be Direct Encounter, Progressive Score, Median Buchholz and Buchholz.


- Cell phones should be switched off at all times in the playing hall. If a players’ cell phone rings during a game he or she will forfeit their game.


- No sharing of prizes. No player can win more then 1 prize


- Touch is a move unless the piece that was touch has no legal move.


- Any player who makes themselves guilty of rude behaviour will be disqualified with immediate effect.


- Any one that registers after 23h30 on 09 December 2010 will be paired only in the second round and will pay N$ 50 for registration as penalty.


-FIDE rules for rapid chess will be put up at the tournament side and players are advised to familiarize themselves with the rules.


- The Local organizing committee will be Mr. Charles Eichab and Ms. Larissa Beukes


- All complaints should be directed to the Appeals Commitee.