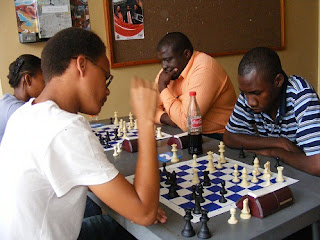 Two-time champion James Dimba finished second with 9 out of 11. Goodwill Khoa edged out tournament organizer Otto Nakapunda on the first tie-break, after they both scored 8 out of 11, to claim third place.

Blitz is a very exciting form of chess, with every player getting a mere 5 minutes to complete the game. This somehow levelled the playing field, resulting in a high rate of upsets!

Said Eichab: “Blitz is very psychological. Sometimes you play moves that are not 100% sound but that pose problems that are difficult to solve in the allocated time. So the clock becomes such a huge factor. The ability to manage the clock plus maintaining good positions on the board is crucial for success in blitz competitions.”

Leonard Nghifikwa won the u/20 section with Julian Isaak taking the u/18 prize. The other winners were Lishen Mentile u/16, Abhinav Lahiri u/14, Hiren Naidoo u/12 and Dante Beukes u/10. Mentile defeated strong players to also claim the Best Woman prize.

Officiating at the prize-giving ceremony, the Permanent Secretary of the Ministry of Sport, Dr. Peingondjabi Shipho said: “I would like to advise the Namibia Chess Federation (NCF) leadership to grow the sport by focusing on school chess activities. The Government will assist you in this regard, through the Ministry of Youth, National Service, Sport and Culture and the Namibia Schools Sport Union. The NCF Exco should work tirelessly to ensure that our youth take part in regional tournaments, especially in neighbouring South Africa, so as to prepare them for the bigger stage. Only then will the senior national chess team be able to perform well at the Chess Olympiad.
NAMSPORTS sponsored N$ 4,000 towards this season-opening event.

Posted by Namchess at 09:56 No comments:

5. FORMAT & RATE OF PLAY:
The tournament will be played over 11 (eleven) Swiss-paired rounds. Rate of play will be 5 minutes per player per game.

6. PAIRING AND TIE BREAK SYSTEM:
Swiss Manager will be used for the pairings. Please note that the breaks between rounds will be used to do the pairings according to the SWISS SYSTEM.
TIE-BREAK: Direct encounter, Progressive Score and Most Wins.
If players are still tied, then 1 game of Armageddon will be played.

In addition, all top 3 finishers will receive certificates.

General Rules:
1. Silence at all times.
2. Cellular phones should be switched off or put on “silent” mode if switched on. No talking while playing allowed.
3. No assistance to chess players will be allowed during their games. A player who offers assistance will be expelled from the tournament.
4. If a player touches a piece, (s)he should move that piece, provided a legal move can be made with that piece. (Touch is a move.)
5. A player may claim a win if his/her opponent makes an illegal move. This claim should be made immediately and not a move later. A King left in check may be captured to end the game.
6. Each player must press the clock with the same hand that moves the pieces. However, when castling, capturing or completing a promotion, a player may use both hands.
7. Any player who makes themselves guilty of rude behaviour will be disqualified with immediate effect.

Posted by Namchess at 11:06 No comments: