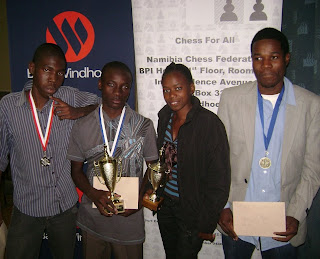 This past weekend, Calvin Eixab from the Zandell Chess Academy won the 3rd Bank Windhoek Namibia National Junior Chess Championship ahead of his closes rivals Sylvester Nanyala, who came second, followed by Richman Tjiriange in third place in the u/20 section. Both Nanyala and Tjiriange had 6 points but Tjiriange had a higher progressive score and thus won on tie-break.
The best girl u/20 Dolly Tuuandi also from the Zandell Chess Academy won the trophy for best female player.
The u/18 had a new expert chess player in Marius Zemburuka, all the way from Arandis with 6/7. He was followed by Jack Tjaronda in second place with 5.5/7 and Haitange Haipinge in third place also with 5.5/7. Haitange lost the direct encounter against rival Jack and had to accept the 3rd place in the u/18 section. Julian Isaak was the favorite in the u/18 section but could only muster a 6th position. He vowed to clean the field come 23 July 2010.

Immanuel Gariseb was undefeated in the u/16 section with a perfect score of 7/7 and 2 points ahead of the field. He was followed by Hange Tjingaete in second place and Xenophone Julius in 3rd place each scored 5/7. Gariseb is one of the favorites to take the title in July 2010, but he will have tough fights as this will be the best of the best in Namibian Junior Chess.

Lishen Mentile, showed her class in the u/14 section when she won the event with 6.5/7 and 1 point ahead of the field. She was followed by her closes rival Nicola Tjaronda. The two girls dominated the u/14 field and was followed by David Kafo who came 3rd and took the bronze.

U/12 was dominated by Etu Nangula with a perfect score of 7/7. Nangula is a very aggressive player and has earned his gold medal with 1.5 points ahead of the field. In second position came the disciplined Tibor Trepper a real fighter on the chessboard. In 3rd place was Chauncey Nakapunda who missed 2 chess event for the year but ended up strong with a bronze medal.

Reinhold Kafo won the u/10 section and was followed by, Galilieu Njembo in second place and Abigail Julius in 3rd place.
In the u/8 section things got equally hot as the youngest of the contestants fought tooth and nail for the glory. Here another bright spark, Elijah Hiluliluah scored perfect with 6/6 and two points ahead of the field. He was followd by Jeandre Mensah with 4/6 and in third place was Kevin Gurirab with 3.5/6.
Worth mentioning is that 11 of the 21 medals were scooped by The Weekend Chess Academy learners.
All in all it was an amazing chess event with 180 participants, 7 rounds and 1309 games played in one day.
6 Namibians in each age group qualified for the 3rd Bank Windhoek Namibia National Junior Chess Championship 2010. This final stage will be played with classic time controls to determine who is who in Namibian Junior chess as the Namibian Junior Champion will be crowned at this event.
The Namibia Chess Federation would like to thank our sponsor, Bank Windhoek for the sponsorship of N$20,000.00 to make these events possible.
Congratulations to all the winners and candidates for the finals in July 2010. 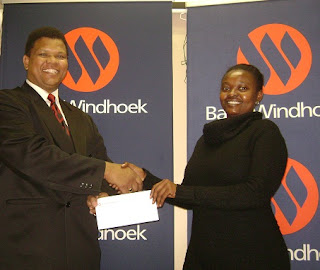 Schools, Colleges, Universities, Chess Academies and any junior chess player U/20 are invited to participate in this event.
In the picture on the left we have the President of the Namibia Chess Federation Max Nitzborn and on the right Ms. M'Kariko Amugulu from Bank Windhoek at the handover of the sponsorship cheque of N$20,000.00.

Registration fees are as follows:

NB: Only members of the NCF will be able to participate. Kindly pay your membership fees for 2010.

Total Sponsorship amounts to N$20,000.00. Bank Windhoek is the official sponsor of the 3rd Bank Windhoek Namibia National Junior Chess Championship 2010. The Namibia Chess Federation would like to thank Bank Windhoek for their continued financial support to make this event possible.

For enquiries please contact Max at 0816152895 or e-mail to namibiachess@gmail.com
Posted by Namchess at 00:12 No comments: