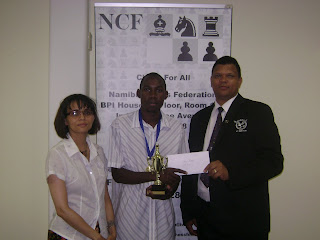 James Dimba, a student at the University of Namibia, emerged victorious in the 5th Kehat Beukes Memorial tournament hosted in honour of the late medical practitioner, Kehat Beukes, the first black specialist physician in Namibia and president of the Namibia Chess Federation from 1994 – 1999.
The runner-up was two times winner, candidate master, Charles Eichab followed in third place by Goodwill Khoa and in fourth place was Otto Nakapunda; also a candidate master and familiar figure in chess circles. In the picture we have Larissa Beukes, The Champion: James Dimba and the President of the Namibia Chess Federation, Max B. Nitzborn.
The best junior player was Dantago Boois followed in second place by Sylvester Nanyala. The best under 14 player was Nicola Tjaronda and best under 10 was Elvira Tibinyane.

The 2010 memorial tournament offered the opportunity for players of different age groups, backgrounds and experience to exhibit their skill on a level playing field. This year’s event was the best attended with over 50 registered players and the biggest cash prize since its inception.
The organisers wish to extend their appreciation to the sponsors over the years for their kind support towards the tournament. Their support has ensured the continuous running of the tournament.
The sponsors over the years are Namibia Beverages, Klein Windhoek Guest House, Kalahari Sands Hotel & Casinos, Swakopmund Hotel & Entertainment Centre, Streethouse, Khomasdal Motor Spares, Mrs Anna Bayer, Capt. Warren Daries and Dr. Neville Cupido.
Story contributed by Charles Eichab.
Posted by Namchess at 11:56 No comments: