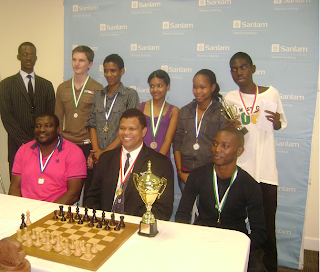 Sanlam Namibia is the Official sponsor of the 6th Sanlam Namibia National Chess Championships 2011 with a total sponsorship of N$19,000 for this event. Sanlam Namibia has sponsored N$78,400.00 since 2005 towards chess. With such a corporate citizen we can only appreciate their investment in sports. The Namibia Chess Federation and all its members are grateful for the financial assistance over the years.

The event was won by Max B. Nitzborn, his first ever National Chess Championship, on 4 May 2011. The newly crowned Champion took the lead in round 4 with full points and remained there until the last round. In round 7 he won the event with one round to spare, after defending masterfully against a fierce attack from Adelino Uirab. His final result was 21/24. He was followed in second place by Candidate Master Charles Eichab with 19/24 and in third place came the 2008 Champion Frans Dennis with 18/24.
The Ladies did not disappoint either, as Rauha Shipindo came 1st with 13/24 followed by Lishen Mentile in second place with 12/24 and in third place we had Camy Nitzborn also with 12/24. Rauha is thus the Women’s Champion of Namibia 2011.
The juniors gave a good account of themselves and 3 took the top honors in their category. The winner of the junior section is Silvester Nanyala who scored an impressive 18/24 and was 4th overall. Silvestor defeated Goodwill Khoa in their final battle and with that netted the 1st place in the junior section. He was followed by the 15 year old Immanuel Gariseb who was leading the juniors from round 2 but could not claim victory at the end as he drew his last game and had to settle for the second place with 16/24 points. In third place we had Christo Retief who defeated a Candidate Master and a top senior player in the last round. Christo stayed focused in his encounters and scored 15/24 to clinch the bronze medal in the junior section. Great performance. Both Immanuel and Christo are students at The Weekend Chess Academy.

Women Section:
1st Prize: Trophy and Gold Medal
2nd Prize-Silver Medal
3rd Prize-Bronze Medal
42 chess players registered and 8 rounds of chess where played over 6 days at the Protea Hotel Thuringerhof. This is one of the best classical chess events Namibia has seen in a long time. With the introduction of the Sofia rules only 4 draws were conceded in the entire event.
For the full results click here...
Posted by Namchess at 05:01 No comments: