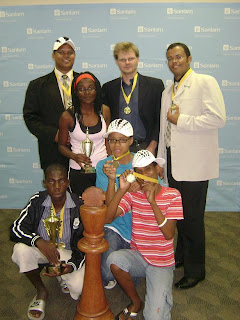 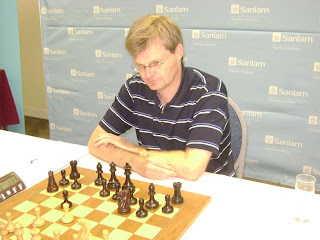 This past weekend, 8-11 April 2010, we saw once again high level chess played by FIDE Master Leonard Mueller. Mueller won all his games from round 1-5 and only conceded two half points in the last two rounds against Candidate Masters Otto Nakapunda and Charles Eichab. He was undefeated and scored 6/7 points.

In second place were Max Nitzborn with 5.5/7 and Josef Nitzborn also with 5.5/7 in third place. Max had a higher progressive score on tie-break then Josef and thus came second overall. The duo, both chess coaches at The Weekend Chess Academy showed their metal this year and only concedes one point each against Fide Master Mueller.
On the junior side it was Unam student, Sylvestor Nanyala who fought the hardest to clinch the gold with 5/7. The arandis born-born Nanyala was follwed by Immanuel Gariseb with 5/7 in second place and Julian Isaak with 5/7 in third place. The progressive tie-break once again split the places.
Tjatindi Kamutuua scored 3.5/7 and was crowned the best women player, it was her début at a classical chess tournament and she took the trophy as Namibia’s women champion.
A total number of 45 players registered but only 42 players participated until round 7.
The Namibia Chess Federation would also like to announce the players who will represent Namibia at the 39th Chess Olympiad in Khanty-Mansiysk, Russia from 19 September 2010 to 4 October 2010. They are, Leonard Mueller, Max Nitzborn, Simon Shidolo, Otto Nakapunda and Charles Eichab.

All chess players who qualified for the Olympiad should get their passports ready by 15 May 2010.
The official sponsor,Sanlam Namibia, had set aside N$16,000.00 for the championships.The Namibia Chess Federation would like to thank our sponsor for their kind gesture.
Posted by Namchess at 09:19